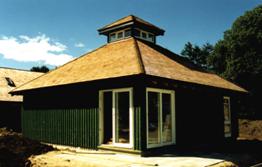 From early in 1990 Martin Edge led this innovative research and practical development project, financed by the then Scottish Homes (now Communities Scotland) and Gordon District Council. The aim was to find creative and socially positive ways of reducing the capital cost of new housing in rural areas. It did so by encouraging exciting, creative design initiatives and carrying out an iterative research – design – research – design process involving research-derived hypotheses.

The project spearheaded the development of housing research in RGU and ultimately led to the foundation of the Environments for People Research Centre and a strong interest in people-environment studies.

The first phase of the project finished in 2002, but a subsequent practical phase resulted in the construction of 14 award-winning homes in the Aberdeenshire . The houses were eventually built for a private landlord and formed the backbone of the architectural practice of one of the former Research Assistants on the project, Gokay Deveci. But the project was deeply interdisciplinary and involved researchers in pyschology, quantity surveying, building surveying and architecture.

A number of designs originally produced for the project have now been built, to critical acclaim.

Click on the links below for details of the...