There is a widely recognised need for research on issues relating to the users of buildings and participation in the architectural design process. There is not, however, a consensual body of knowledge on the extent of existing research, where the priorities for research lie or what resources, methods and approaches exist to carry out this research. Both the need for such research and the lack of an agreed set of methods is acknowledged by the professional bodies, Royal Institute of British Architects (RIBA) and Royal Incorporation of Architects in Scotland (RIAS), key public clients like the Scottish Executive and other organisations such as Architecture and Design Scotland, the Lighthouse and the Commission for Architecture and the Built Environment (CABE). This research seeks to map out the scope of existing knowledge on user participation in architectural design, explore existing methods of fostering forms of user participation, and point to gaps in both knowledge and methods. It will propose an agenda of national and international relevance for further research in the field, and seek funding for implementation of key items on that agenda. There are a number of reasons for undertaking this research. On the supply side there is a growing sense within the architectural profession of the need for design to be more socially inclusive. This is partly to respond to broader socio-political objectives such as stated in the Policy on Architecture for (the ’s only government policy on architecture) and in the objectives of CABE, but also other design guidance. It is also partly in response to issues concerning the nature of design, as undertaken in the residential market by the large scale housing developers, and in public buildings such as schools and hospitals. Allied to this is the development of a new range of computer-based visualisation techniques, which are relatively recent and often experimental and not as yet embedded within practice, with the objective of acting as methods for design participation. On the demand side, the tradition of the user as client continues in community architecture, albeit not as well documented as in the 1980s, and in some instances is growing in importance, for example, in self-build housing. On both 1 Policy agendas include the Communities Plan (ODPM, 2003a, 2005), which places the value of design at the heart of sustainable communities and community regeneration. Legislation, including the Housing () Act 2001 and policy statements such as the Scottish Policy on Architecture (Scottish Executive, 2001), have recognised the value of participation in design and governance.

The project was driven by the following primary research questions:

• WHY? – Given the agreed need for wider social participation in the design process, why is there limited communication between research into and practice of the subject?

• WHAT? – What activities in design are participated in, and to what extent does the architect see this role as guiding the user as opposed to investigating the user’s existing interests/awareness?

• HOW? – How social and technical tools for participation can be used. How can non-specialised language and tools be used to communicate more openly in the process, and how will this affect use of resources?

• WHERE? – Which types of buildings might be more or less suited to participation of users and the general public in the design process? 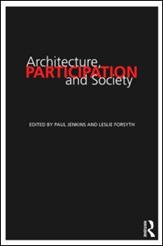 The project ran for 1 year from April 2007, but is set in the context of a number of continuing research interests of the 4 collaborating universities.

A book detailing the findings of the project and the case studies involved was published by Routledge in 2010. See some details here...